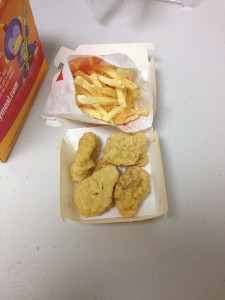 The post by Dr. Lovdahl that so many of my Facebook associates were sharing contained a photo of a meal apparently purchased six years ago from McDonald’s, containing Chicken McNuggets and french fries. Dr. Lovdahl wrote in her post:

“It’s been 6 years since I bought this “Happy Meal” at McDonald’s. It’s been sitting at our office this whole time and has not rotted, molded, or decomposed at all!!! It smells only of cardboard. We did this experiment to show our patients how unhealthy this “food” is. Especially for our growing children!! There are so many chemicals in this food! Choose real food! Apples, bananas, carrots, celery….those are real fast food.”
~ Source

I am astonished that a so-called “doctor” would publish such tripe. You would think that anyone today that is a graduate of a college that bestows the degree of Doctor, and that college is involved in human sciences, would have at least taught their students some basic chemistry as well as The Scientific Method.

Or perhaps Dr. Lovdahl is aware of The Scientific Method and some basic chemistry, but chooses to promote her own biases using the respect that most people would give a person with the degree of Doctor bestowed upon them. Whatever the case may be, this is where the rot is, and I can tell you why Dr. Lovdahl observed no rot in the McDonald’s food.

Let’s look at Dr. Lovdahl’s original post: “We did this experiment to show our patients how unhealthy this “food” is.”

How does this experiment show any such thing? It doesn’t show that it is “unhealthy” nor does it show, as Dr. Lovdahl claims that “there are so many chemicals in this food.” There likely ARE many chemicals in the food; but not in the way Dr. Lovdahl is trying to suggest. Everything that exists has a chemical makeup. Even apples. There is nothing sinister going on here whatsoever.

Now, if Dr. Lovdahl truly respected science (and apparently, the college she graduated from claims to hold integrity and science as high values), she would have conducted her experiment using multiple meals, as well as control subjects. For example, she might have made up some french fried potatoes at home, reduced their moisture level through freezing or refrigeration, (using only organic potatoes, of course!), deep fried them without the addition of any other chemicals but for a sprinkling of salt, put it in a bag and stuck in a dry cupboard for six years along with her McDonald’s purchased meal.

Or, if she wants to compare apples, bananas, and carrots, she could have also dehydrated those, deep fried them, stuck them in a cupboard for six years, and checked to see if she found rot.

I suggest you try it at home before you go believing Dr. Lovdahl. Here’s some facts for you:

Food preservation can be done by reducing moisture and adding salt. Anything deep fried would have a lot of water moisture driven out of it, and replaced by oil. Now, the oil could go rancid if left for six years, open to the air, but you would not see this. But you would probably have food that appeared to have withstood the element of time, and showed little or no rot.

This experiment does not prove that this is not “healthy food,” nor does it prove that lots of chemicals were added to the food by McDonald’s. It is shameful that a person with the title “Doctor” would try to persuade you that her experiment was somehow a valid experiment. It’s not. It’s actually.. anti-science.

Food rot depends on a number of different things, including levels of moisture. Foods that have low to no water moisture and that are kept in a dry place, will not rot at the same rate as high moisture foods and in fact, can withstand against rot for a very long time depending on the conditions they are kept in. Does a doctor involved in human health not know this very basic fact?? It does not require the addition of any sinister chemicals to keep food from rotting.

Dr. Lovdahl owes her fans an apology for attempting to show something in a non-scientific manner, but present it to novices in such a way that it may be a valid experiment.

Or perhaps Dr. Lovdahl was never taught the scientific method. In that case, any person who has graduated from the Palmer College of Chiropractic is suspect, and I would not want to be treated by any graduate of theirs.

I have some challenges for Dr. Lovdahl:

Purchase the finest organic potatoes you can find. Cut them into “chip” (as called in the UK) or “french fry” shapes. Freeze them.

Heat up the finest healthiest oil in a deep fryer. Take frozen raw french fries and deep fry them until they are cooked. Remove french fries, allow oil to drain, sprinkle with salt, place in a paper bag, put in a cupboard in a dry place.

Come back and tell us what you see.

Dr. Lovdahl compares the McDonald’s meal to “real food” such as “apples, bananas and carrots.”

Okay, apples have a higher level of moisture than potatoes; if left out of some preserving condition, they will rot in a short amount of time, definitely less than six years. But here’s what I want you to do: Dehydrate the apples to the same moisture level as potatoes after cutting them into chip shapes. Freeze them. Then take them out of the freezer and deep fry them. Remove from the deep fryer, sprinkle some salt, put in a bag, and leave in a dry place for six years. Tell me what you see. Tell me if you will conclude the apples must have had chemicals added to them.

I am sure Dr. Lovdahl means well, but pushing pseudo-science onto people, and pushing it in such a way that it apparently proves or shows something, is utterly irresponsible. I would hope that any regulatory agency or the good doctor’s school that apparently values integrity will have a little chat with the doctor about scientific integrity, and making false claims while using the title of Doctor, as apparently happened at the Chiropractic clinic.

The rot is not in the McDonald’s food; the rot is in the critical thinking skills that seem to be no longer taught these days.

I actually do quite of food preservation with my son – including dehydrating, fermentation, and canning – perhaps Dr. Lovdahl might be interested in learning more, and about food chemistry.

Leave a Reply to Student Of Science Cancel Reply