A warning about Wind Hellas and Cosmote – two of the major telecom companies in Greece that provide internet, mobile phone and landline phone service. If you are planning on visiting Greece for an extended time and think it should be fairly simple to get internet service, you would be wrong.

Truly, these companies are disorganized, and wouldn’t last very long in countries where business is competitive. I feel sorry for Greeks that have to put up with the kind of service that we have experienced so far. Perhaps Greeks living in Greece must put up with this horrible service that include promises not kept, disorganization, and lack of communication (or flat out wrong communication), but in doing so, they are also going to cause many businesses who want to invest in the country to be cautious. Which is sad, really.

Maybe if you’re a big corporation or one of the rich immigrants that are arriving in Greece to take advantage of some of the cheap property that is available, you can “buy” better service somehow. But honestly, Greek telecoms, if you want to be “world-class” you must find a way to better manage things.

Let’s first talk about our experience with Wind Hellas:

From our experience so far, this is not an issue at the employee level. This is obviously a top-down problem, beginning with the management of this company. From what we have experienced, this simply cannot be the problem of some rogue employee. If you’re a manager or an executive of Wind Hellas, please take a long hard look at yourselves before you start blaming employees of your company. The screen shot of the text messages from Wind will tell the story – and combined with our experience, its obvious this company has deep issues.

I’ve had a mobile phone number with Wind Hellas since August of 2018. It’s a “pay as you go” plan and it was fairly easy to set up; I just needed to produce my passport and every couple of months, top up my balance on my account. Naturally, it was my first choice to go visit in order to get a landline phone number along with an internet package at the house. We visited on June 14th, 2019 in the afternoon at the Wind Hellas office in Nea Ionia. At that time, we were told it would take about two weeks; a little long for my liking, but we were told that was the best they could promise.

Now, in my research, I have seen at least one post from a native Greek on a message board suggesting that this two week waiting period is due to the fact that in Greece, subscribers have two weeks to cancel their service otherwise they are considered to be liable for the remainder of the contract. I’m not sure if this is true as I don’t really see how it should take two weeks to switch on a landline and arrange for internet service. But the thinking was that if you wait that full two weeks for the installation to happen, and you don’t like the quality (or lack of quality) after it’s been installed, you’re out of luck if you want to cancel as more than two weeks will have expired since you signed.

This issue of the two week grace period to cancel was a strong consideration for me, after what subsequently happened with Wind Hellas.

Wind Hellas Gives Us An Installation Date – And Don’t Show Up – Twice!

On Sunday June 23, 2019, we received a text message advising us that the service would be installed on the following Tuesday (June 25th) and that someone might need access. No approximate time was provided. That meant we cancelled plans for that day. We had some things we wanted to do, so we called the Nea Ionia office to see if there was any idea of what time they might arrive. The person that spoke to us on the phone indicated that as far as they knew, installations were done between 9AM and 1PM.

By 1PM, no one had showed, there as no dial tone, and the router that had been sent to us showed no internet connectivity. We then called their Customer Service line, and the man we spoke with insisted that we should have service the next day (Wednesday), and then even changed his mind to assure us it would be later on Tuesday, the same day.

Except that didn’t happen. There was on phone or internet by the end of the day on June 25th, and certainly not on the 26th either. But, we did get another text message from Wind Hellas on Tuesday evening!

It was the exact same message they had sent us on Sunday evening, only this time the message said they would be here on Thursday June 27th.

Honestly, the fact they did not show up on Tuesday, and that we had been told when we called that it was practically guaranteed by end of day on Tuesday, and if not, “for sure tomorrow,” this was more than just a little frustrating. Now we have to plan to be around the house all day on Thursday.

Except… can you guess? No one showed up! No communication from Wind! No dial tone. And no internet connectivity.

By this time, we were one day away from the two week sign up date, and I was feeling frustrated and a little worried that this was going to continue. Especially when it’s totally unacceptable to be told in the first place, we’d have service by Tuesday (practically guaranteed by the customer service rep we had talked to), and if not, by Wednesday, but then told Thursday – and it’s been almost a full two weeks.

I made the decision to cancel the service with Wind as they had obviously been pathetic. Its not an acceptable way of doing business, making people sit around and wait, missing appointments, and no truthful communication.

We Cancel Wind Hellas – But It Gets Worse

On Friday, a visit was made to the Nea Ionia office along with the router that had been shipped to us. A cancellation request was made and the gentleman advised that he would put in the cancellation order, but that it might not go through in time before the line and internet was installed. In addition, they would not take back the router and advised that someone else would come to pick it up.

On Saturday evening (June 29th), we get yet ANOTHER text message from Wind, this time advising us they would be here on Monday, July 1st to install the line and the internet. It is almost laughable really, that Wind seems to think they can just send out random text messages with random dates, making people wait around for them, and never show up. Of course, no one showed up on Monday either, although we did get a phone call from them (finally someone at their end thought to call us). When they were advised that we had cancelled the service on Friday, this person told us that we could not cancel the telephone line until August 8th, even if it had not been installed yet.

Here’s a screenshot of the text messages from Wind Hellas: 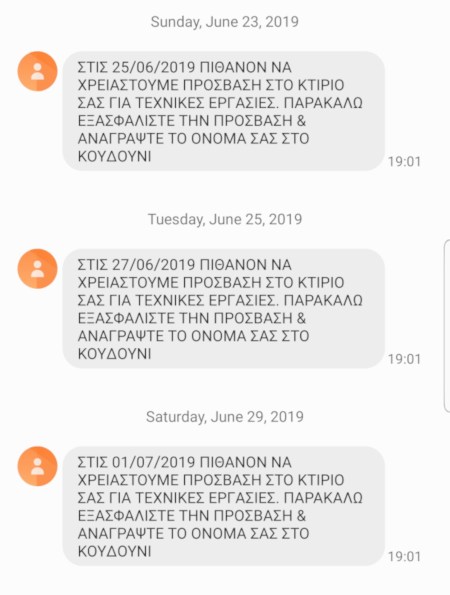 No matter how many apologies we received from the Wind Hellas person, there were no explanations for the above text messages that we had received. In fact, there person tried to blame it on Cosmote, apparently that Wind that tried to make the arrangements to install the service, but Cosmote controls all the lines and makes it hard for the other companies.

Sorry Wind Hellas – I’m not buying that explanation and besides, it’s unacceptable.

On Tuesday, we had another call from Wind, and again we had to advise them that we had cancelled the service. We also received a call from a technician, and again had to tell him we cancelled.

On July 4th, Wind sent us a text message advising us that service had now been installed. Because we had made other arrangements, and we have told so many people already that it’s CANCELLED – we ignored it. I did plug in a telephone into the jack though, just to see if there was a dial tone.

So that’s been our experience with Wind Hellas so far. If this is typical, I have no clue how people can deal with this kind of service from a major corporation. It’s totally unacceptable.

Our Review Of Cosmote So Far

So, could Cosmote do any better? After the frustrating experience with Wind Hellas and a decision to cancel the installation request within the two week period because I was pretty nervous about any contract with them, and the poor service from them so far, I decided to try out Cosmote.

How Has Cosmote Done?

To be honest, not much better than Wind, and an even longer installation date (contrary to what we were promised).

On Saturday June 29th, 2019, the day after we cancelled Wind, we walked into the Cosmote office in Nea Ionia. We spoke with a very nice gentleman who listened to our frustrations with Wind, and then promised that he would have us a landline and internet in possibly 5 business days, a week at the most. We first had to look after a property issue, which we did. He also needed to find out what level of service was available at our address and promised to get back to us by Monday. He also promised that he would get us an appointment within a range of 3 hours on whatever day the installation would take place.

We had to call him on Monday after waiting, but okay – he seemed genuinely interested to help and was still waiting to hear from his head office or technical team (or something).

Today, we get a phone call from Cosmote to tell us the order has gone through…. and our date of installation is….

That’s almost a full three weeks (okay, 2 1/2) since we walked into the Cosmote office.

In the meantime, I just tried to “top up” my data with my pay as you go plan with Wind Mobile, and would you believe:

1. They will not take credit cards issued outside of Greece.

2. They will accept PayPal, but somehow I’ve reached some limit of top ups in 15 days and although they have taken the money out of my PayPal account (PayPal emailed me a receipt), it will not be applied to my account for some period of time, and therefore have limited data available to me until such time whatever limit I have reached expires.